Now, Forager: How I Stopped Worrying and Started Eating Weeds

The woods are lovely, dark and deep with tasty treats, if you know what to look for 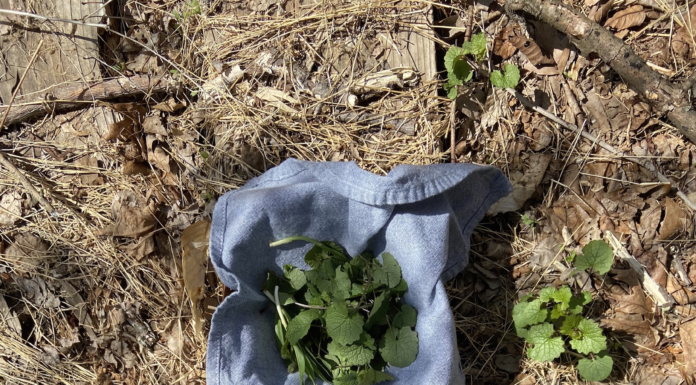 One morning last April, I left my dirty breakfast dishes in the sink, let the kitchen door slam behind me, and walked into the woods with a knife in my hand. My mission wasn’t sinister. I was just looking for something exciting to eat.

For nearly 20 years, I’d managed to make a living by thinking about, playing with, and writing about food—but it had always been more than just a job. Lockdown meant retreating from the tight confines of our 500-square-foot Brooklyn apartment for my childhood home in a sleepy corner of western Connecticut. It also meant forsaking a lot more than block parties and Friday night burgers and beers at our beloved corner bar. We gave up saag paneer on speed dial, spontaneous jaunts to Sunset Park for xiao long bao or huaraches al pastor, and twilight Brighton Beach boardwalk picnics replete with pickled watermelon, malty black bread, smokey cigar-shaped kabonosky, and chubby cabbage-stuffed piroshki.

All that I had lost, though, forced me to find another outlet for my gustatory creativity: the 80 acres of untrampled woodland unfurled outside my front door. It wasn’t really my maiden voyage—this was my parents house and I’d grown up in these woods, climbing oaks and snacking my fair share of hedgerow grapes. On weekend visits home, I’d flirted with mushroom foraging—a primitive urge I probably owe to my Polish forebears, who are fanatical for the hunt. Still, given the steep learning curve and the high stakes (common mushroom names like “destroying angel” “poison pie” and “death cap” paint a pretty vivid picture of the potential dangers facing newbies) it wasn’t long before I’d come to the conclusion that amateur mycology probably wasn’t the best foundation for a family dinner.

But, “Green Things”? (This being the category to which I artlessly assigned every vine, sprout, and weed beyond my parent’s manincured lawn.) Well, they seemed like a safe enough place to start. At the back of a bookshelf in my bedroom, I located a leatherbound copy of Peterson’s “Edible Wild Plants“—untouched since my middle school years, by the look of the handwriting inside—and thumbed to the index page for “Spring.” Mallows and chickweed, wild onions and cress, sorrel and milkweed and lamb’s quarters: who could guess what fresh new tastes awaited me?

Not that I could claim to be a pioneer. From New England to New Zealand, the search for wild food is literally as old as the hills. And thanks to star chefs like Rene Redzepi (who included, among other marvels, reindeer moss and powdered oak shoots on the tasting menu of his late, great Copenhagen restaurant, Noma) and Magnus Nilsson (whose acclaimed Swedish restaurant, Fäviken, served dishes crafted entirely from ingredients sourced from the surrounding grounds), in the last decade foraging has been energetically embraced by the food cognoscenti. Hunting and gathering, once for survival, are now fashion.

Tempting as it may be to scoff at trendy buzzwords like locavore and terroir, there’s no dismissing the primal, almost poignant, response foraged goods can inspire—maybe because, in thrall to the seasons and the whims of landscape and weather, they’re the very definition of ephemeral. Supermarket produce is engineered for longevity, but wild foods are fleeting.

They also require patience. I’d been trudging almost 20 minutes, lost in a podcast, before I spotted something promising—or, I should say, I sniffed it. Looking down, I saw a ragged green mound of fan shaped leaves, scalloped at the edges, under the sole of my shoe, and lots more little mounds beyond. Another deep inhale revealed the spicy aroma of horseradish. Peterson’s confirmed: garlic mustard.

The bad news: since its introduction to America from Europe in the 1800s, this aggressive invasive has run roughshod over habitats in forests, fields, and roadsides across the Eastern U.S. and Midwest. The good news: because it is entirely edible, with gently bitter, tender leaves that taste like a cross between Swiss chard and roasted garlic and sweet stems that can be sauteed like pea shoots, you can harvest it with abandon. I stuffed a few heaping handfuls into my basket, declared the morning a success, and headed back towards home scheming up a garlic mustard green- riff on potato leek soup for lunch.

Emboldened by that success and greedy for more, on an afternoon hike a few days later, I kept Peterson’s in my back pocket and my eyes peeled for my next meal. I felt like a prospector striking gold when I spotted a thick stand of ramps alongside a damp creekbed—after all, back at my old city Greenmarket they regularly sold for upwards of $5 a bunch. (They also, I learned, tend to be unsustainably harvested: if you want the plants to return and flourish in future seasons, foragers should harvest ramps by snipping the plants at ground level, not pulling them up bulb and all.)

Yards away I noticed a clutch of nettles along the edge of the trail and I gave silent thanks for the fact that COVID germophobia meant I now always had a stash of rubber gloves in my backpack. Those suckers really do sting! But, I later learned, blanch them briefly, mince, and mix with fresh ricotta, flour, and Parm…and they also make terrific gnudi. Suddenly, I wasn’t so citysick anymore.

By the next weekend, I knew I was on a roll. I crossed the road and climbed a neighboring hill, skirting an overgrown meadow where a knot of cows nodded behind barbed wire. The last traces of snow had finally melted and my boots squelched with each sticky step—but, looking down, it was apparent that whatever the area lacked in polish, it made up for in Japanese knotweed.

All along the tumbledown verge, stiff shoots mottled pink and green with tops like tightly rolled paint brushes poked from the ground. Here was a colony of the Northeast’s ultimate invasive, an unlikely darling of chefs, and curse of gardeners everywhere. The young shoots resembled a cross between asparagus and bamboo, but I’d heard they tasted like rhubarb and, intrigued, read up on the stuff—which is also when I learned that parts of the plant are high in resveratrol, the same polyphenol that supposedly gives red wine its cardio-protective, cancer-reducing health benefits. I’d call that a win-win. So, I snapped off a heap of petite stalks and piled them into my pack alongside some dandelion blossoms and greens, and headed back to the kitchen.

I would make a tart. A  jam tart, like before—like the one I used to sometimes buy a wedge of with my latte at the coffee shop where I sat and worked. I dumped the weeds in the sink, gave them a wash, and set to chopping—marveling at how ordinary the entire process had already started to become. The stalks came to a simmer in a saucepan and I added a scoop of sugar and stirred. I pressed butter and brown sugar and flour into raggedy crumbs for the topping and let them fall through my fingers into a bowl. On the counter sat a shortbread pie crust in a battered tin pan, waiting to be filled.

Later, when dinner was over and the tart had cooled, I sliced it into sections, sliding each one onto a pretty white plate, and presenting them to my family like a housecat returning from the hunt. Eat! I said, my mouth already full. You’ll never guess what it tastes like! Is that strawberries? Or is it hope?