This Contemporary Landscape Artist is Painting the Town Green 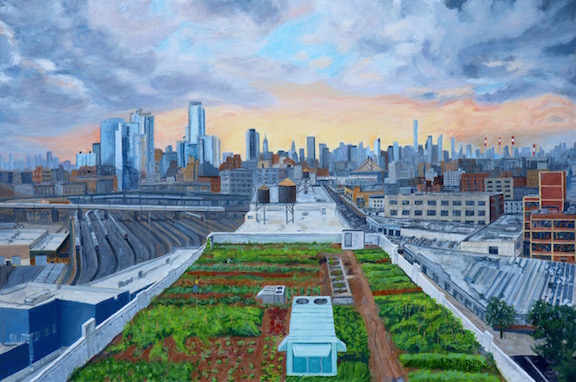 Artists have their muses—spouses, lovers, bathing beauties, sprightly dancers. For New York City-based painter Elizabeth Downer Riker, her inspiration comes from the land, or to be more precise, the people who work it. Riker has spent her career chronicling farming communities, first in Oaxaca, Mexico, then, for the better part of the last decade, in New York City. Farmers in New York City, you ask? Why, yes. When Riker moved to Brooklyn from Mexico in 2011, she discovered a burgeoning urban farming scene and got to work. Her subjects range from modest community gardens to acres-large commercial rooftop farms, all rendered vividly in saturated colors and Impressionist-style brushstrokes. Through her work, Riker is attempting to manifest a vision of a greenified city, one in which farms and gardens are the rule, not the exception. We caught up with her to learn more about her process, and how painting farms could possibly lead to a brighter future.

What made you choose farmers as your subject?

When I lived in Mexico I started going into these villages where people were farming communal lands and their own land, but almost always as families. They would plant together and they would weed together and they would harvest together. It was so inspiring for me to see that as a daily part of somebody’s life, that they are so connected to where they come from. In these villages they are plowing the fields with bowls. There are no sounds of tractors or any kind of machinery. It’s just birds and breeze and people talking to each other. That was very unique for me; I have grown up in cities, and I had never observed that before.

When I moved back to New York City, I was looking for a subject like that and having a hard time finding it, until I saw an article in the paper about Eagle Street Rooftop Farm. It was started in 2009 by Ben Flanner and Annie Novak on top of a former bagel factory in Greenpoint, Brooklyn. It’s a 6,000-square-foot rooftop farm, and the first commercial rooftop farm in New York City. When I saw this photo in the paper of them crouching down on a rooftop covered with incredible soil, as opposed to planters, with a very dramatic cityscape behind them across the East River, I was struck that that was a place where I could go to paint people working the land, but in an urban setting.

New York City has agrarian roots. I once read that Brooklyn and Queens were mostly farmland well into the 20th century. Has that history factored into your work?

Definitely. One way is by looking at the work of Eric Sanderson, who wrote a book called Mannahatta: A Natural History of New York City. It’s this extensive book that reimagines what Manhattan and the surrounding boroughs actually looked like in terms of their forests and wetlands and biodiversity and fauna and flora. I found it fascinating to see how it changed from forested land to farmland and eventually how it became urbanized.

In many of your paintings, the city looms in the background, with the farm and farmer in the foreground. As a New Yorker I wouldn’t think twice about it, but in reality, that’s pretty unusual.

I wanted to paint one community garden in particular, Eagle Slope in the Bronx, because it has an elevated subway frame going overhead and there was something about that juxtaposition—the train, a wall with beautiful graffiti on it behind the garden, and buildings and apartment complexes. It’s a completely urban setting, yet in the foreground there are families and children and young people picking tomatoes and planting chile peppers and carrying bundles of produce in this garden. To me it is the best of both worlds, that you can be in the city but also be connected to nature.

Have your shows inspired people to start gardening?

I’ve had people come to a show and then ask about how to build a rooftop farm on their building. I point them in the direction of The Rooftop Growing Guide, Annie Novak’s book on rooftop farming. We all had a victory in November because New York City passed a law requiring all new construction to green their roofs with either plants, solar, or a combination of both, and they give tax abatements and grants and loans to facilitate that. The building of green roofs can help mitigate the urban heat island effect, and in New York City, green roofs help with stormwater runoff, which protects our sewage system from being overwhelmed and spilling into our rivers. Cities like Paris have done this 15 years ago. Many cities are doing it, but we are slow on the uptake. But we’re getting there.

Would you consider yourself an activist in this area?

I guess so. My 14-year-old daughter is a climate activist. She goes to the U.N. every Friday to strike for the climate. Part of what I am motivated by is the feeling that the young people on this planet are being told, “You’re going to have to fix this problem. We have failed you and we are handing you a very dangerous and devastated planet.” I feel like I want to do something to change that outcome. And I believe that it can be changed, and I think that images can be a powerful force of change. Images can help people envision a different reality. Through my paintings, I do want to present a greener, more sustainable city and planet. That is my goal.