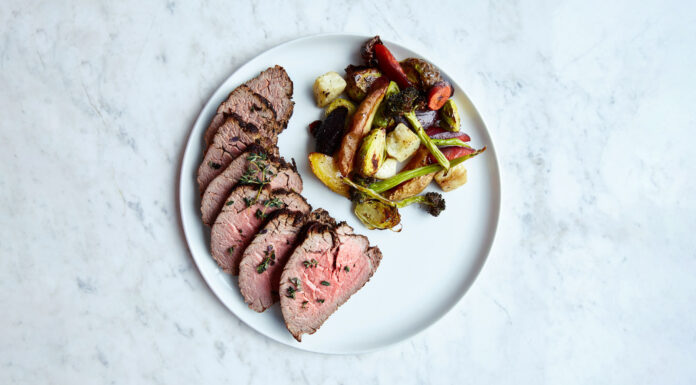 When the news dropped last week that, in the name of sustainability, the popular cooking website Epicurious won’t post any new beef recipes, and Eleven Madison Park, one of the world’s top restaurants, is pivoting to an entirely vegan menu, I couldn’t help thinking of a cattle operation I saw a few weeks ago an hour or so from where I live in Northern California. In the Capay Valley, the Yocha Dehe Wintun Nation has designated 13,000 acres of its land as pasture for grass-fed cattle. These cows and steers are integrated into the landscape of rolling golden hills, towering valley oak, and dusty chaparral in a way that promotes the growth of natural grasses and preserves the landscape, reduces fire risk, and provides habitat for native species.

Indeed, the tribe’s primary focus in all of its agricultural businesses is to preserve its ancestral land and protect the environment—and its beef operation does this by rotating a small herd over a large area, moving the livestock to other parts of Northern California when necessary, and using environmentally friendly technologies, like solar-powered water pumps, to avoid waste. Where, I wondered, was all of that work reflected—or even acknowledged—in this conversation about the evils of meat production?

The Yocha Dehe are not alone in their efforts. Many small ranchers across the country have spent decades developing sustainable practices for raising cattle and other animals. Proponents of regenerative agriculture point out that, when managed properly, cattle ranching helps sequester carbon by promoting the growth of native grasses. (One study, published in 2018 by Michigan State University, concluded that under the right conditions, grazing cattle might actually sequester enough carbon to more than offset the methane produced by the animals.) Other farmers will point out that a well-run, diversified farm with both animals and crops creates an ecosystem where the scratching of chickens and rooting of pigs benefit the soil, while their manure acts as organic fertilizer. There are even people developing new ways to lower bovine methane emissions; a study at U.C. Davis, for instance, found that changing cows’ feed to include 1 percent seaweed reduces methane by 60 percent.

Don’t get me wrong; I’m not a particularly dedicated carnivore. I’ve seen enough feedlots to keep me away from industrial meat forever. In my house, vegetarian meals are so common that we scratch our heads at the idea of Meatless Mondays, and when we do eat animal protein, we eat very small portions. (Our family of three can split a single steak and still end up with leftovers to scatter into salads for the rest of the week.) But the idea that all meat consumption is bad, and a plant-based diet is inherently good, is overly simplistic—–and drawing hard lines in a nuanced conversation is a problem with regard to meat, and so many other areas of our political discourse.

The argument that the problems in our food system can be substantively improved by simply eliminating meat ignores the reality that there are many other, deeper problems in the way we produce food. Monocropping and the over-application of pesticides are both terrible for the environment, although innovative start-ups are harnessing machine learning and genomics to enable farmers to custom-tailor weed-prevention strategies that are less destructive.

Shipping food across the country and around the world also increases the carbon footprint of many fruits and vegetables. According to EPA data, 2 percent of greenhouse gasses come as direct emissions from cattle raised for beef and more comes from how our society chooses to raise those animals, but the majority comes from all the other areas of our highly industrialized lives.

I would argue that the biggest issue with meat consumption is actually the way modern life has institutionalized overconsumption—the glorification of enormous steaks and the idea that meat should be the center of all our meals—as well as the factory farming that feeds this outsized demand. There was a time not too long ago when we ate meat very differently, in much smaller quantities and in ways that were better not only for the planet but also for our health.

A few years ago, I was fortunate to share some  meals with farmers in the Yuanyang Rice Terraces in China. This series of terraced rice paddies, which spans more than 620 miles, constitutes one of the most sustainable farming systems in the world, and the people I met there approached everything on their farms, including raising animals, through this lens.

While they’ve adopted all of the trappings of modern life (cars, cell phone addictions, packaged snack foods), they’ve also continued the agricultural traditions that their ancestors relied on for centuries: Food scraps are set aside for pigs and chickens, which produce the manure used in the families’ farming plots, and eventually those animals provide enough meat for each family to have a celebratory meal and then add bits of protein to vegetable-forward dishes for the rest of the year. The area’s Muslim groups take a similar approach with cattle and buffalo. This is how we used to eat here in the U.S. not too long ago, and there’s a movement among many people to return to this kind of thoughtful, smaller-scale consumption. Aren’t these the kinds of system-wide improvements that chefs and media outlets should be promoting?

Lastly, while a chef’s decision to remove meat from their restaurant’s menu is something of a personal and artistic choice, sites like Epicurious are presumably intended to teach people about foods from around the world. The public response to Epicurious’ announcement demonstrates how these kinds of blanket decisions can backfire by polarizing people and cutting off discussion. The dozens of angry carnivores who publicly denounced the site’s decision are now far less likely to engage in any discussion the publication’s editors might start about more responsible ways to buy and eat meat (a discussion that might actually have impacted these readers’ habits). Not killing living animals to feed yourself is a legitimate personal decision for many vegetarians and vegans, but not the same argument Epicurious has made. Instead,wouldn’t the environmentally responsible thing be to encourage improving our food systems in as many ways as possible, and bringing as many people as possible into that discussion?

For many chefs and food educators, this approach would be far more welcome than a blanket prohibition on an entire food category. “I get very irritated when all of the conversation about food seems to be about what we shouldn’t eat. It just feels very reductive, restrictive,” says Amy Thielen, a Minnesota-based chef who is the host of the Food Network cooking show Heartland Table and the author of the cookbook The New Midwestern Table. “It’s the same as when media outlets talk about politics and narrow the conversation down to a black and white equation that they think people can understand. I want to give people more credit. I think people can handle the conversation about eating less meat, rather than no meat. I think people can understand that maybe we can eat too much cheap, poorly made ground beef and maybe we could eat less of it.”

Looking at the ways publications and restaurants announce their decisions to ban some or all meat, I can’t help but think that these policies often feel more like performance  than actual, practical steps towards addressing the food system’s impact on climate change. Taking aim at the easy target of the meat industry may get more clicks than digging down and confronting the larger problems in the ways we grow, raise, transport, and process food. But the public figures and companies in a position to drive these conversations might do more good in the world by acknowledging the complexity of these issues and working toward changing the food system as a whole than by singling out and vilifying just one element of our vast food landscape.